Delegate the installation of an Exchange 2016 server

An Exchange administrator can provision a new server in Active Directory hours or even days before Exchange is installed on the new computer. After a server has been provisioned, the person doing the installation needs only to be a member of the Delegated Setup role group to install Exchange.

Normally, when Exchange is installed, the people installing Exchange need to be members of the Organization Management role group.

This is because when Exchange is installed, changes are made to Active Directory, and only Exchange administrators, who are members of the Organization Management role group, can make those changes. The following list shows the changes that are made:

·         The following access control entries (ACEs) are added to the server object within the configuration partition for the Delegated Setup role group:

o    Full Control on the server object and its child objects

NOTE: Public folders are administered at an organizational level; therefore, the creation and deletion of public folder stores is restricted to Exchange administrators.

·         The Active Directory computer account for the server is added to the Exchange Servers group.

·         The server is added as a provisioned server in the Exchange Admin Center.

Keep the following in mind:

·         At least one Exchange 2016 server has to already be installed before you can delegate the installation of additional servers. The person who installs the first server needs to be an Exchange administrator.

To provision a server for Exchange, you need to use Exchange 2016 command-line Setup.

Choose the command that matches where you're running Setup: 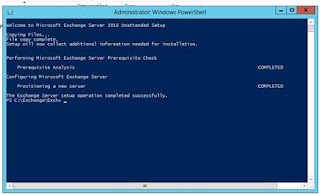 Make sure to add user who is going to install the Exchange to Delegated Setup group and Local Admin Group on the server. 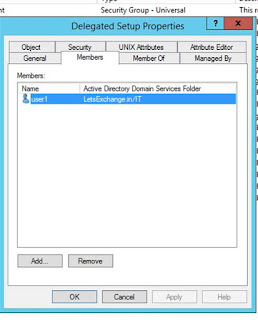 Now Delegated user should be able to install Exchange Server.

Below is the screen shot while the unattached user instating the Exchange Server, we can see in the screenshot Perquisites Analysis completed successfully. 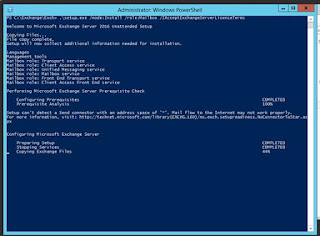